Catalysis for an electrified chemical production 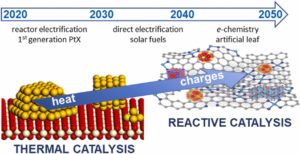 Chemical production needs to transform radically toward fossil-free sustainable chemical production to meet the targets for net-zeFrom a personal view, this perspective analyses the gaps and opportunities for catalysis to address the electrification of chemical production from a high-tech scenario. It is assumed that a significant substitution of fossil fuels is required to meet the net-zero emissions targets. This vision significantly impacts the future of catalysis and sustainable chemical production. We identified short (up to 2030), medium- (2030–2040) and long-term (2040–2050) objectives for catalysis. Novel catalytic routes of direct manufacturing chemicals and fuels using renewable energy should be developed. These are mainly based on photo-, electro- and plasma-catalysis, indicated shortly as “reactive” catalysis. Their common characteristic is that reactive species generated in these processes provide the energy to overcome the activation barriers. They differentiate from conventional heterogeneous catalysis, where the energy for the catalytic transformation is given by heat and thus indicated as “thermal” catalysts. The main priority in the short-term scenario is the design of novel “thermal” catalysts to exploit the new opportunities given by the electrification of chemical reactors. The innovation related to exploiting the novel possibilities offered by i) structured temperature gradients inside the reactor and ii) operations under fast dynamic temperature control. The medium-term challenge is direct electrification to produce chemicals and fuels, including energy vectors. Their development generates the bases for future carbon-neutral chemical production. Accelerating this innovative transformation requires identifying critical issues and focusing research on them. In the longer term, the necessity of artificial-leaf-type solutions is remarked. They should integrate all the necessary functionalities, including operations without a separate unit to capture/purify the reactants (such as N2 or CO2). These solutions will be an enabling tool for a distributed production of chemicals and fuels.ro emissions by the year 2050. The feasibility of this transformation, the motivations, status and gaps, and perspectives are discussed after introducing how this change also implies a change in the model of production. Realizing the defossilization of chemical production involves electrifying the chemical processes, especially crucial elements such as chemical reactors, and the direct use of renewable energy to drive the chemical reaction. With a focus on electrocatalysis, the most relevant cases of (i) light olefin production, (ii) direct synthesis of main intermediates such as formaldehyde and acetic acid, and (iii) the production of aromatics are analyzed. The feasibility of these routes in the short–medium term is shown, while other cases such as the direct synthesis of ammonia from N2 require turning the approach to other directions. On a global scale, defossilization of chemical production is feasible in the medium–long term with a cut of over 800 Mt per year CO2 eq. emissions in line with the expectation to reach the net-zero emission target. A final section introduces a short discussion about some critical questions regarding the sustainability of fossil-free chemical production.